When service members pass through this small town in Nebraska, the community comes together to thank them. 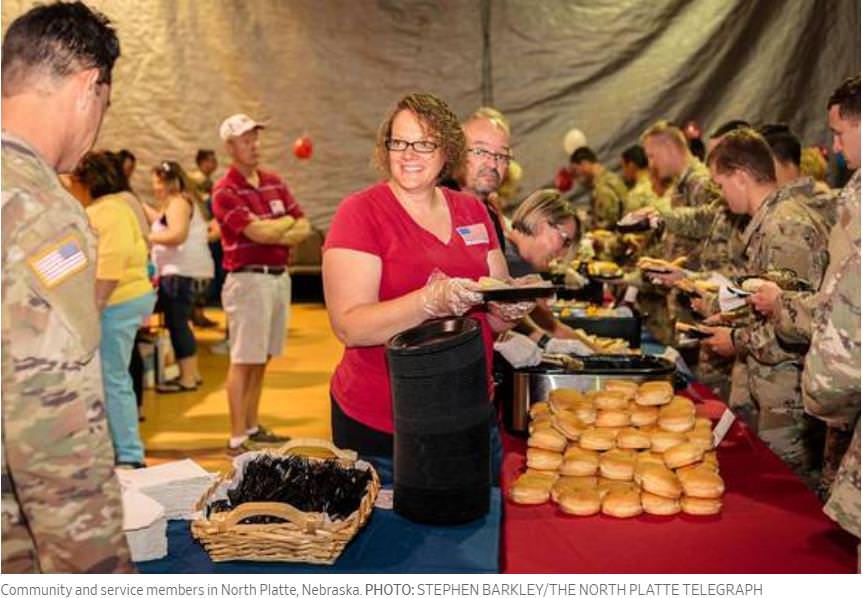 ‘We were overwhelmed,” said Lt. Col. Nick Jaskolski. “I don’t really have words to describe how surprised and moved we all were. I had never even heard of the town before.”

Col. Jaskolski, a veteran of the Iraq war, is commander of the 142nd Field Artillery Brigade of the Arkansas Army National Guard. For three weeks earlier this summer, the 142nd had been conducting an emergency deployment readiness exercise in Wyoming, training and sleeping outdoors, subsisting on field rations. Now it was time for the 700 soldiers to return to their base.

A charter bus company had been hired for the 18-hour drive back to Arkansas. The Army had budgeted for a stop to get snacks. The bus company determined that the soldiers would reach North Platte, in western Nebraska, around the time they would likely be hungry. The company placed a call to the visitors’ bureau: Was there anywhere in town that could handle a succession of 21 buses, and get 700 soldiers in and out for a quick snack? 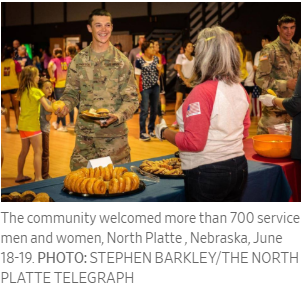 During World War II, North Platte was a geographically isolated town of 12,000. Soldiers, sailors and aviators on their way to fight the war rode troop trains across the nation, bound for Europe via the East Coast or the Pacific via the West Coast. The Union Pacific Railroad trains that transported the soldiers always made 10-minute stops in North Platte to take on water.

The townspeople made those 10 minutes count. Starting in December 1941, they met every train: up to 23 a day, beginning at 5 a.m. and ending after midnight. Those volunteers greeted between 3,000 and 5,000 soldiers a day. They presented them with sandwiches and gifts, played music for them, danced with them, baked birthday cakes for them. Every day of the year, every day of the war, they were there at the depot. They never missed a train, never missed a soldier. They fed six million soldiers by the end of the war. Not 1 cent of government money was asked for or spent, save for a $5 bill sent by President Franklin D. Roosevelt.

The soldiers never forgot the kindness. Most of them, and most of the townspeople who greeted them, are dead. And now, in 2018, those 21 busloads from the 142nd Field Artillery were on their way, expecting to stop at some fast-food joint. 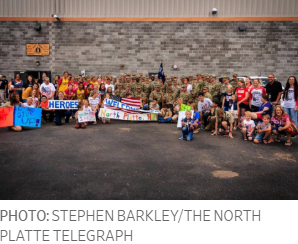 “We couldn’t believe what we saw when we pulled up,” Col. Jaskolski said. As each bus arrived over a two-day period, the soldiers stepped out to be greeted by lines of cheering people holding signs of thanks. They weren’t at a fast-food restaurant: They were at North Platte’s events center, which had been opened and decorated especially for them.

“People just started calling our office when they heard the soldiers were on their way,” said Lisa Burke, the director of the visitors’ bureau. “Hundreds of people, who wanted to help.”

Mayor Dwight Livingston stood at the door for two days and shook every soldier’s hand. Mr. Livingston served in the Air Force in Vietnam and came home to no words of thanks. Now, he said, as he shook the hands and welcomed the soldiers, “I don’t know whether those moments were more important for them, or for me. I knew I had to be there.”

“It was one soldier’s 21st birthday,” Lisa Burke said. “When I gave him his cake, he told me it was the first birthday cake he’d ever had in his life.” Not wanting to pry, she didn’t ask him how that could possibly be. “I was able to hold my emotions together,” she said. “Until later.”

When it became time to settle up—the Army, after all, had that money budgeted for snacks—the 142nd Field Artillery was told: Nope. You’re not spending a penny here. This is on us.

This is on North Platte.

The MINNESOTA GOPHERS VOLLEYBALL open their 2018 season hosting the BIG TEN/ACC CHALLENGE, August 24th-25th at Target Center.  Wisconsin and North Carolina return for this year’s event, while Florida State joins the fifth-annual challenge in 2018.  Two matches will be held on both August 24 and 25 as the Gophers and Badgers face UNC and FSU in four total matches.  The Gophers face Florida State on Friday, August 24, followed by North Carolina on Saturday, August 25.